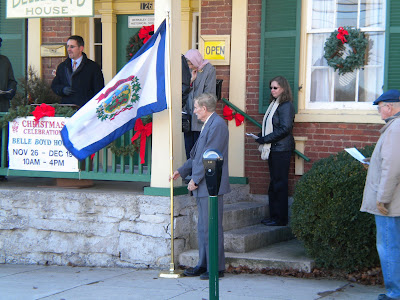 As a follow up to a successful tea held on Sunday, the Berkeley County Historical Society gathered on Tuesday, December 7th to remember those who lost their lives sixty-nine years ago at Pearl Harbor and honor all veterans who have served to protect our nation.  It was a bitter cold day with gusty winds. 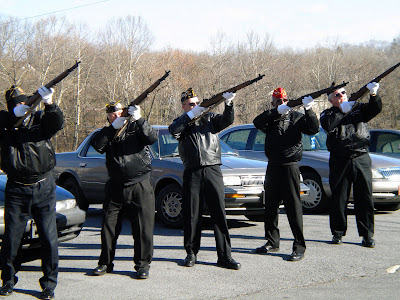 The program began outside at 11AM with the Posting of the Colors by the 157th Military Police Company, WV Army National Guard.   Cyril Kammeier, Commander of the Eastern Panhandle Detachment, Marine Corps League led those gathered in the Pledge of Allegiance and Rev. Robert S. Hill, Jr. recited the Invocation.  Members of the Veterans Combined Honor Guard, Jim Grose, Commander, performed a rifle salute honoring all who gave their lives in the defense of freedom followed by the playing of "Taps". 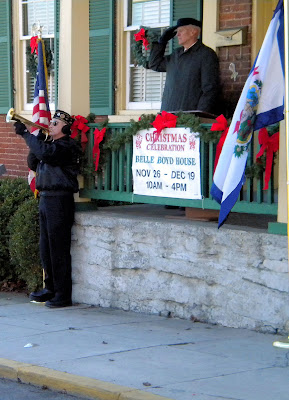 Due to the cold, the remainder of the program was moved inside where Delegates John Overington (member) and Walter Duke were thanked for their attendance.  After brief remarks by Historical Society President, Todd Funkhouser and Vice President Cheryl Rodgers, the speaker, Mr. Charles H. Brown, USAF, Ret. was introduced. 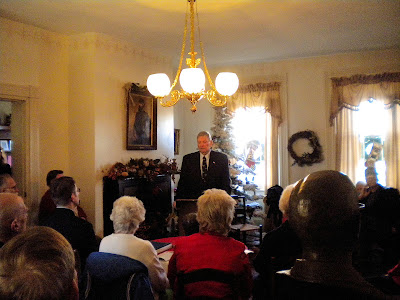 Mr. Brown told the harrowing tale of his B-17 being shot down over the North Sea during WWII and how his crew (less one) were captured by Germans and incarcerated in Stalag 4.  They were later marched for 89 days across Germany when the Russians came knocking on the door of the Eastern Front.  They were later liberated by a Major who told everyone what to do in no uncertain terms, while toting a Colt 45 on his hip.  Mr. Brown said that Major was the prettiest sight he'd ever seen! 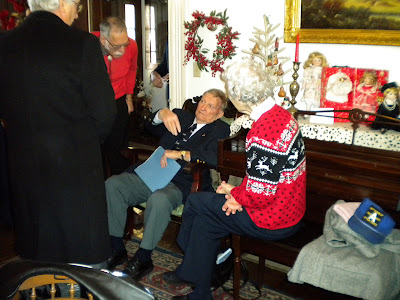 Lastly, awards of merit were awarded to Florida Fritz, Margaret LeFevre and Katherine Genung.  Joanne Huntsberry received a plaque for her Distinguished Service to the society. 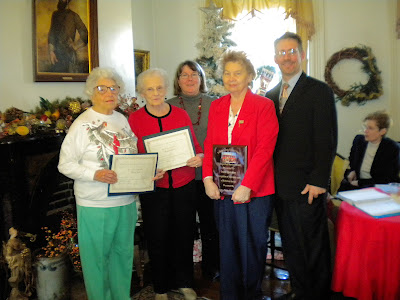 The genesis of this day was Florida Fritz, a BCHS member and volunteer.  She has compiled three books of our Berkeley County WWII Veterans and is a member of that generation herself.  These books are available for researchers at the BCHS Archives.  Cheryl Rodgers, Vice President of Museums and Tourism put the programs together with the cooperation of member Cheryl Brown as well as Richard Seeley, Commander of the NCL-EPD; Jim Grose, Commander of the VCHG and Mr. Cy Kammeier.
Posted by Katherine at 11:32 AM

Thanks for your interest in the Berkeley County Historical Society

The Berkeley County Historical Society owns and operates the following:

The Archives and Research Center located at 136 East Race Street, Martinsburg, West Virginia. Hours posted on website at BCHS.org. Research assistants are on hand daily to help you with your inquiries.

The Berkeley County Museum at the Belle Boyd House, the Ben Boyd Store and the Rose Garden; located at 126 East Race Street, Martinsburg, West Virginia. Hours posted on website at BCHS.org. The Museum is also open for Special Events, or by appointment. Please call to arrange your personal tour; bus groups are very welcome with advance notice.

The Berkeley County Historical Society Storage Center is located at 223 North Spring Street and houses our collections. We are currently running the "45 Club" fund raising effort to curtail the mortgage on this property.

The Herb Garden is located next door to the Archives and Research Center and provides a restful retreat throughout all the seasons of the year.